Alumni on the Bench-Stephanie Hulsey 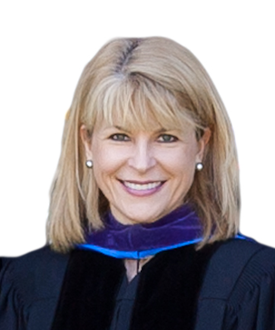 Hon. Stephanie Hulsey didn’t expect to become a judge when she was growing up. Rather, the Central Coast native trained to be an opera singer, and followed that dream to the Manhattan School of Music. After earning both a bachelor’s and master’s degree in music, she spent the next decade performing classical music and musical theater professionally on the East Coast.

Her life took a turn, as so many lives do, when her father was diagnosed with cancer. Hulsey returned to California to spend time with her family, though she fully expected to go back to New York. Then she met her husband, and decided to remain out west. “It’s the most geographically beautiful place, but it’s not the performing arts capital of the world,” she said. “It became clear I needed more education.”

Hulsey found her new path somewhat by chance—she saw a flyer for a mock law school class at the Monterey College of Law and decided to check it out. “I was taken in by the Socratic Method,” she said, recalling how the professor, public defender Fred Herro, demonstrated the technique to probe for the truth.

“I wasn’t sure I would practice law, but I knew a legal education could be a platform for many professions through which I could serve the community.”

Hulsey enrolled in the JD program and graduated in 1998. She was then hired by the DA’s office and over the years worked her way up the ranks to the position of assistant district attorney. When a judicial seat opened in 2014, Hulsey submitted her name and was elected.

When asked how her prior career as a performer was similar to working as an attorney, Hulsey commented, “Discipline is the characteristic that carries over. In a performance, everything is memorized and practiced. You have to learn the music—usually in a foreign language—to the extent that it is so ingrained that it becomes a part of you. It’s all very well choreographed.

“The study of law involves learning critical thinking skills and reading voluminous amounts of material to learn the rules of law and their rational. The practice of law requires constant, meticulous preparation to ensure a thorough understanding of how the law applies to each individual case.”

However, despite all the hours of preparation, what happens in a courtroom may not follow the script. “I found it much different than performing in a concert or an opera,” said Hulsey. “ There’s a lot more thinking on your feet.”

Hulsey said she was inspired to work for the District Attorney’s Office when she learned that the duty of a prosecutor is to “seek justice” and feels that her career in the District Attorney’s Office prepared her for the transition to becoming a judge. “I believe it is essential to be an attorney before becoming a judge, but listening, doing legal research and trying to come to the right and just decision or resolution is more within my natural comfort zone than being one of the adversaries in the process.” She also emphasized the importance of humility in practicing law and being a judge, saying “Every person who comes to the courts is entitled to due process and respect. As a judge, being humble is a very important aspect of delivering on those promises.”

The nucleus of the legal community

Hulsey is quick to credit the faculty at Monterey College of Law for instilling in future attorneys important values such as humility, discipline, hard work, preparation, professionalism and civility. When asked about the people who were important in her life thanks to the college, she replied, “It is really a limitless list. I had tremendous role models. And they were demonstrating an ethical practice in their day jobs.”

Monterey County’s legal community is relatively small and tight knit, and in one way or another, the College has touched most members’ lives.  “MCL is the nucleus of creating the succession plan for the legal community in Monterey County,” said Hulsey. “It’s important that the law school fosters those values and qualities—it’s a small enough community that chances are you’ll be appearing in front of the same judges and same attorneys. Your word, reputation, and the way you comport yourself are important.”

While many students, like Hulsey, find their way to law school later in life as part of a career transition, others are the children of working judges and attorneys in the area. “Those students chose the Monterey College of Law with the blessing of practicing attorneys—and regardless of where their parents went to law school,” said Hulsey. “It really speaks to how integral the college is to our legal community.”

With the college expanding to campuses in Santa Cruz and Kern counties, even more people stand to benefit by having access to legal education in their region. “MCL was created as a community law school to offer an opportunity for people from diverse backgrounds and life experiences who may not otherwise have had the opportunity to study law. I see that aspect as essential in moving into the future,” said Hulsey.

Though Hulsey speaks of many of her classes and professors with profound admiration, she recalls the high point of her law school experience as being a finalist in the Heisler Moot Court.

She prepared under the direction of Professors Joel Franklin and Michael Stamp. “The professors devise a hypothetical appellate case in a way that enables both sides to present legally supported arguments, so each can sink their teeth into the Supreme Court precedent,” she said. “The issue my year revolved around a gang ordinance and our “case” was similar to an actual case pending at the time. It required a balancing of individual liberties protected by the Constitution against the interests of the community’s public safety.”

Hulsey spent several months studying the case law, building her arguments, and preparing responses to questions that the panel could ask. She was exhilarated to be one of the four finalists from her class chosen to present arguments in front of the public and legal giants like Monterey County Superior Court Judge Richard Silver and US District Court Judge Thelton Henderson.

Also in the audience that evening was District Attorney Dean Flippo. “He later said he made the decision then that—as long as I passed the bar exam—he would hire me. It was a significant moment in directing my future as an attorney,” said Hulsey.

Hulsey has since returned to the Heisler Moot Court—on the panel of judges, and more recently, teaching the class as an adjunct professor. “It’s an honor to come full circle, to prepare the students for their presentation, to participate in the panel and pepper the finalists with those questions,” she said. “It brings me back to where I came from.”

Although many law schools offer mock trials and moot courts, MCL’s Heisler Moot Court is unique in that the public is invited to hear the arguments and engage with the legal issues being discussed. It’s one of the many ways the College has an impact in the community at large, beyond just the legal community.

Hulsey cited the College’s Community Justice Center, community workshops and legal clinics as further examples. These programs connect law students with people in the community who can’t otherwise afford an attorney, and creates a sense of investment in the community so that later the students want to continue to give back.

Hulsey recalled participating in the small claims legal advisory clinic directed by Frank Hespe when she was a student. “This was another impactful experience. I learned active listening, how to identify legal issues, and how to figure out what the client was seeking. So often the important thing is for people to be heard and feel fairly treated in the process. Often that’s just as important as the result.”

Hulsey said she cannot overemphasize the importance of respect, fairness and due process in the pursuit of justice. “A healthy practice of the law leads to equity, justice and a healthy community at large,” she said.

Hulsey believes the College’s founders shared this vision when they created the law school 50 years ago. Throughout her legal career, she has sought justice by practicing the values she saw modeled at the Monterey College of Law.